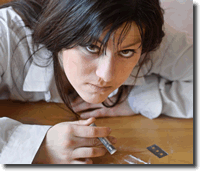 Cocaine is a powerful stimulant which carries a very high potential for abuse. Cocaine abuse leads to a broad range of medical complications affecting nearly every one of the body's organ systems. Regardless of how cocaine is used or how frequently, an user can experience acute cardiovascular or cerebrovascular emergencies, such as a heart attack or stroke, which could result in sudden death. Cocaine-related deaths are often a result of cardiac arrest or seizure followed by respiratory arrest.

Cocaine abuse has spread throughout our society. Cocaine abuse does not respect age, profession, race, religion, or physical attributes. Cocaine abuse is a devastating condition that not only degrades a persons health, but it destroys friendships, marriages, families and communities.

Cocaine abuse causes changes in behavior, including irritability, hypervigilance (being overly watchful or alert), paranoid thinking, excessive activity, and eating and sleep disturbances. Cocaine abuse can also cause severe mental disturbances. The user may develop a psychosis in which he or she feels paranoid and anxious and has hallucinations. Some cocaine abusers display unpredictable, odd behavior that may become violent. Stopping cocaine use after a binge often causes a crash, in which the user becomes depressed, feels tired, and has eating and sleep disturbances. At first during the crash, the person does not crave more cocaine. But as time goes on, the user may think of little else other than finding the next dose.

Some abusers of cocaine report feelings of restlessness, irritability, and anxiety. A tolerance to the high may develop - many addicts report that they seek but fail to achieve as much pleasure as they did from their first exposure. Individuals abusing cocaine will increase their doses to intensify and prolong the euphoric effects. While tolerance to the high can occur, users can also become more sensitive to cocaine's anesthetic and convulsant effects without increasing the dose taken. This increased sensitivity may explain some deaths occurring after apparently low doses of cocaine.

Other complications associated with cocaine abuse include disturbances in heart rhythm and heart attacks, chest pain and respiratory failure, strokes, seizures and headaches, and gastrointestinal complications such as abdominal pain and nausea. Because cocaine has a tendency to decrease appetite, many chronic users can become malnourished.

If you or someone close to you is experiencing cocaine abuse problems, it is imperative that you seek help immediately. Where cocaine abuse is concerned, time is of the essence, and the sooner a solution is offered to the addict, the sooner they are on the road to recovery.