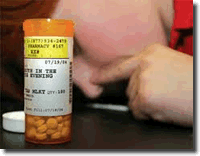 Ritalin (methylphenidate) is a central nervous system stimulant, similar to amphetamines in the nature and duration of its effects. It is believed that it works by activating the brain stem arousal system and cortex. Pharmacologically, it works on the neurotransmitter dopamine, and in that respect resembles the stimulant characteristics of cocaine. Short-term effects can include nervousness and insomnia, loss of appetite, nausea and vomiting, dizziness, palpitations, headaches, changes in heart rate and blood pressure, skin rashes and itching, abdominal pain, weight loss, and digestive problems, toxic psychosis, psychotic episodes, Ritalin abuse and addiction, and severe depression upon withdrawal.

Unbeknownst to many, Ritalin is actually considered a schedule II controlled substance which means that the drug has a high potential for Ritalin abuse. Ritalin has been abused by students illegally in order to assist with concentration on exams and work. There has often been criticism of the use of Ritalin for children because many of the symptoms, such as restlessness and lack of concentration, associated with ADHD are characteristic of young children. The other major criticism is the allegation that using this medication can lead to a life of substance abuse.

Ritalin abuse is a common side-effect of Ritalin use. Ritalin is closely related to the illegal street drugs Methamphetamine, street name "crystal meth." Ironically, our society imprisons people for manufacturing drugs similar to the drugs physicians commonly prescribe to millions of children.

Adolescents given prescriptions for Ritalin often sell their Ritalin medication to schoolmates and friends who abuse the drug by crushing the tablets and snorting Ritalin powder like cocaine. Another form of Ritalin abuse is through dissolving Ritalin in water and injecting the fluid.

The pattern of Ritalin abuse and addiction is characterized by increasing dosages and frequent episodes of bingeing, followed by severe depression. Severe Ritalin side effects, including death, have been reported with Ritalin abuse.